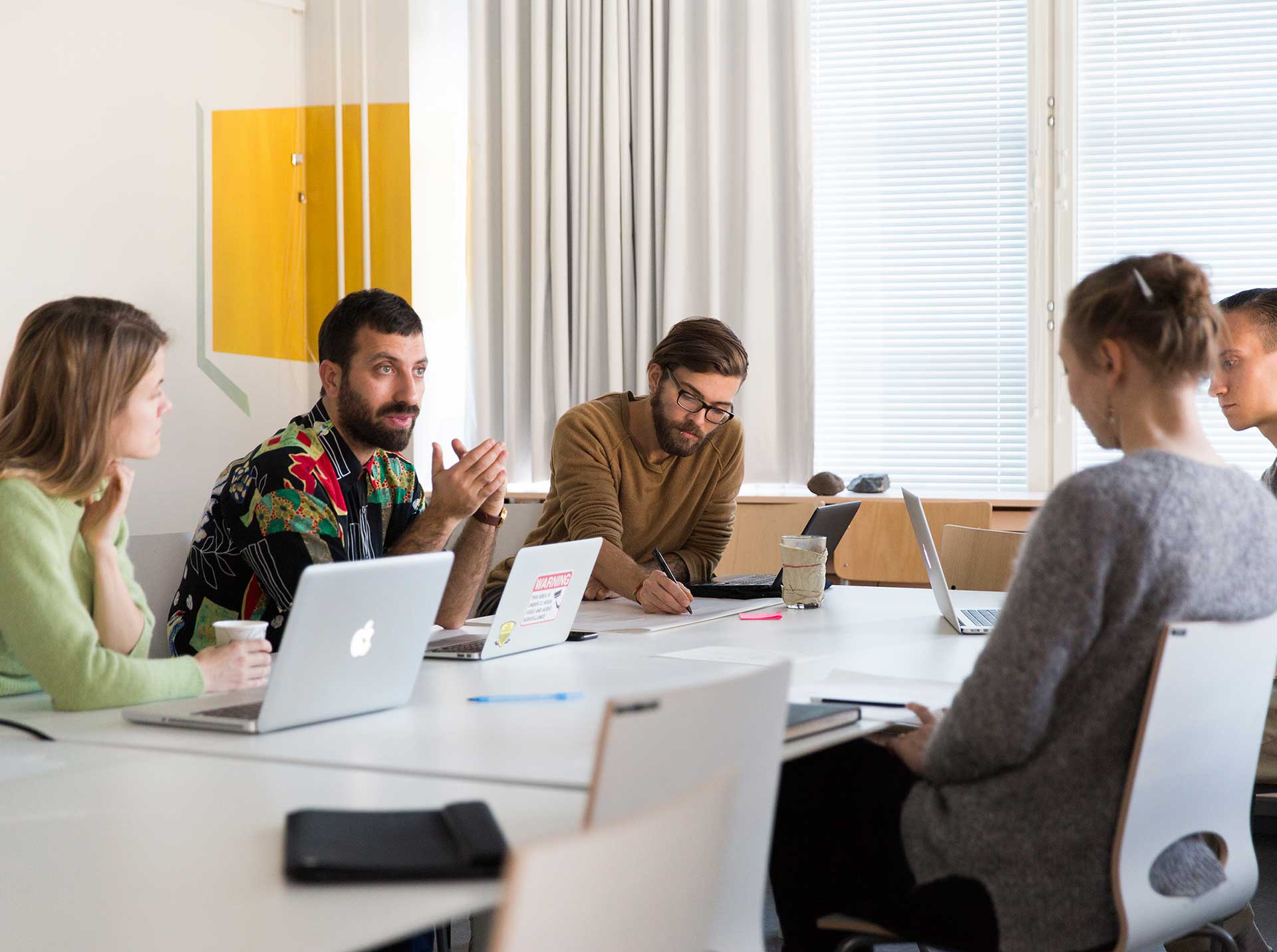 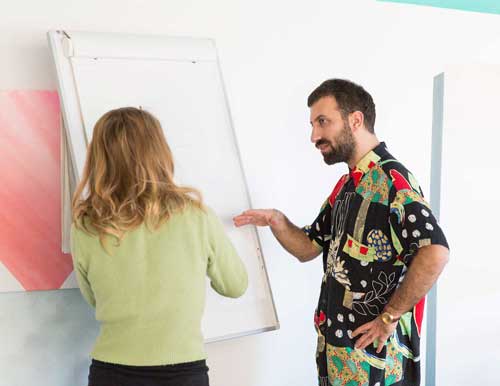 The Academy of Fine Arts’ international mentoring programme offers a teaching model that involves internationally successful artists, curators and art executives, with the aim of supporting MFA students and deepening their understanding of what it means to practice in an internationally networked art world.

The mentoring programme for Master of Fine Arts students enriches the Academy of Fine Arts’ diverse education programme. Enabled by Saastamoinen Foundation, the two-year programme supports students’ learning and artistic activities to get the most from their educational experience. Individual advice is given in teaching sessions, studio visits and discussions, all of which are tailored to individual and group needs. International research trips provide the students with unique tools to examine their own art and to learn about the art world outside of Finland. Sessions may cover aspects of working methods, career experience, professional networking, technical expertise, time management, or writing and reading development. By building up a personal and a professional relationship, mentoring provides emotional and moral encouragement and fosters a range of artistic skills and creative thinking. Since 2017 the group is mentored by the curator Angela Rosenberg and the artist Pilvi Takala, succeeding the initial kick-off by Ahmet Öğüt and Pilvi Takala in 2015-2017. 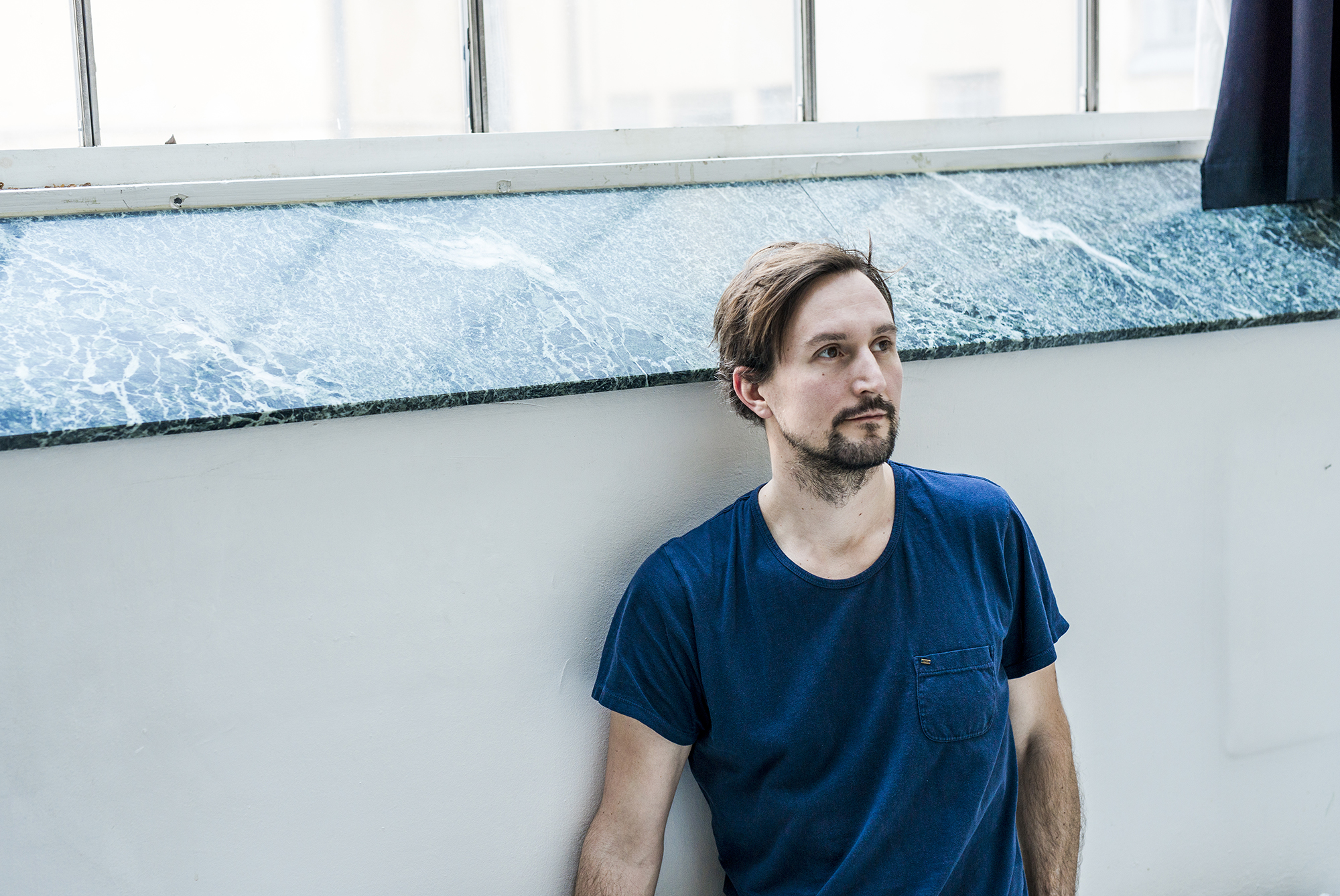 Hans Rosenström (b. 1978), Lohja, Finland),  studied in both the Malmö Art Academy (Sweden) and the Finnish Academy of Fine Arts, Helsinki, from where he received his MFA in 2007. Currently he lives and works in Stockholm. Rosenström’s practice centers around installations that play with the relation of psychological to the physical within the viewer in a specific moment and place. The works are often carefully produced in relation to the sites where they are experienced. When creating these situations he uses a wide variety of media and material; from the ephemeral yet tactile qualities of sound to architectural interventions. The presence of the viewer is integral in the work which often remains incomplete until it has been activated / enacted. Rosenström has participated in multiple group exhibitions including: A I S T I T / coming to our senses, Taidehalli, Helsinki, Finland (2021), Anatomy of Political Melancholy, Schwarz Foundation, Athens Conservatory, Greece (2019), Everything Was Forever, Until It Was No More, 1st Riga International Biennial of Contemporary Art, Riga (2018), The Garden – End of Times, Beginning of Time, Aros Triennial, Århus, Denmark (2017), The Vanishing Point of History, L’Été Photographique de Lectoure, France (2015), Theater of The Mind, Cranbrook Art Museum, Bloomfield Hills, USA (2014) and Nouvelles Vagues: The Black Moon, Palais de Tokyo, Paris, France (2014). His solo exhibitions include No Land is an Island, Kuntsi, Museum of Modern Art in Vaasa, Finland (2019), a u g u s t, Helsinki Contemporary, Finland (2017), Off Seasons, in collaboration with Stormglas at EMMA, Espoo Museum of Modern Art, Finland (2017) and Du utan jag, The Studio, Moderna Museet, Stockholm Sweden (2011). Rosenström’s works can be seen in multiple collections, including Solomon R. Guggenheim Foundation, New York, Kiasma, Museum of Contemporary Art, Helsinki, EMMA, Espoo Museum of Modern Art, Amos Rex and the Saastamoinen Foundation Collection. In 2020 Rosenström was awarded the Finnish State Prize for Media Art. In 2015 he was a nominee for the Ars Fennica Prize and in 2011 he received the The Finnish Art Association Ducat Prize. 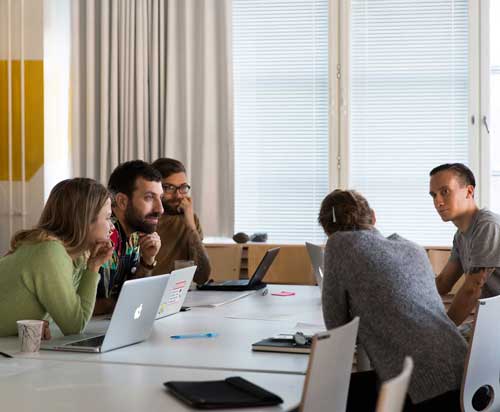 Angela Rosenberg (b. 1968, Frankfurt am Main) is a Senior Executive Art Consultant with a wide range of professional experience in the international art world. Trained as an art historian, her curatorial work includes the production of large scale exhibitions, publications and art events. Some of her projects focus on the subject of artistic interventions in museums and collections, and include the development of new presentation methods. Major projects were realised with Philippe Parreno at Gropius Bau Berlin, the Humboldt Lab Dahlem and the collections of the Museum für Asiatische Kunst and the Ethnologisches Museum of the Staatliche Museen zu Berlin. Since 2000, the Berlin art scene remains an important focus of her work, with comprehensive shows and texts, such as the artist-curated series at Temporäre Kunsthalle Berlin or at MOT, Tokyo. A wide range of her publications and essays on contemporary art can be found in international art magazines, artist's books and for various cultural institutions and private collections.

Pilvi Takala (b. 1981, Helsinki) is an artist living and working between Berlin and Helsinki. Her video works are based on performative interventions in which she researches specific communities in order to process social structures and question the normative rules and truths of our behaviour in different contexts. Her works show that it is often possible to learn about the implicit rules of a social situation only by its disruption. Her work has been shown at MoMA PS1, New Museum, Palais de Tokyo, Kiasma, Kunsthalle Basel, Temple Bar Gallery + Studios, Manifesta 11, Careof, CCA Glasgow, International Film Festival Rotterdam, HotDocs, Witte de With, and the 9th Istanbul Biennial. Takala won the Dutch Prix de Rome in 2011 and the Emdash Award and Finnish State Prize for Visual Arts in 2013.

Ahmed Öğüt (b. 1981, Diyarbakir, Turkey) is a visual artist who has achieved international acclaim, with works in numerous museums, biennales and festivals around the world. In 2009, Öğüt and Banu Cennetoğlu represented Turkey at the Venice Biennale. Finns in particular will recall his work Fahrenheit 451: Reprinted. This work, commissioned by Checkpoint Helsinki, involved a fire engine that toured Helsinki printing out forbidden books. Öğüt’s works are also held in important international collections, including Kiasma’s collections in Finland. In autumn 2014, Öğüt was the first visiting professor to participate in the Academy of Fine Arts’ visiting professor programme. During his professorship he focused on sculpture.