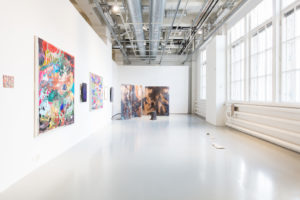 Mohammad Salemy is an independent Berlin-based artist, critic and curator from Canada. He holds a BFA from Emily Carr University and an MA in Critical Curatorial Studies from the University of British Columbia. He has shown his works in Ashkal Alwan's Home Works 7 (Beirut, 2015), Witte de With (Rotterdam, 2015) and Robot Love (Eindhoven, 2018). His writings have been published in e-flux, Flash Art, Third Rail, Brooklyn Rail, Ocula, Arts of the Working Class and Spike. Salemy's curatorial experiment For Machine Use Only was included in the 11th edition of Gwangju Biennale (2016). Together with Patrick Schabus, he forms the artist collective Alphabet Collection. Salemy is the Organizer at The New Centre for Research & Practice.